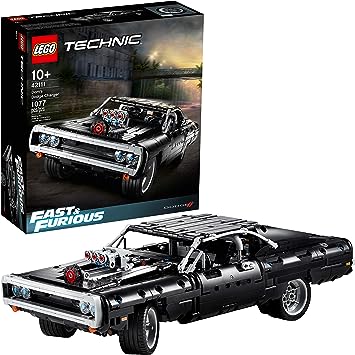 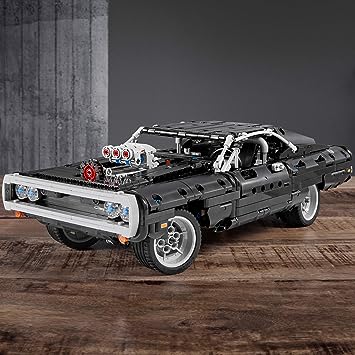 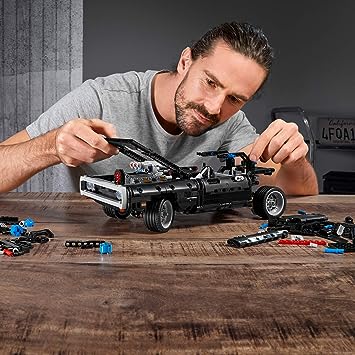 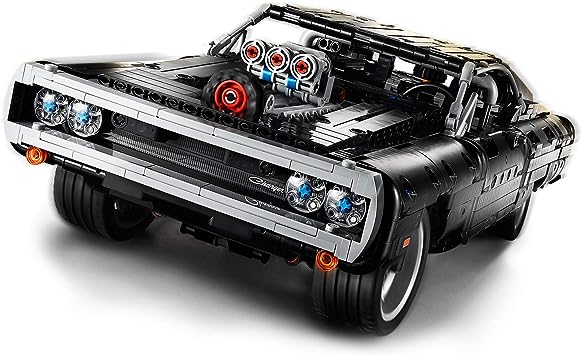 Give fans of Fast & Furious the ultimate thrill with this LEGO Technic Dom’s Dodge Charger 42111 building set for kids and adults. Based on the iconic 1970s Dodge Charger R/T, it’s packed with authentic details. The opening hood reveals a model version of the iconic V8 engine. Other cool features include moving pistons, wishbone suspension, steering system and air blower. There are even nitro bottles in the trunk to bring Dom's daring high-speed chases to life. Just like the real thing! Fans aged 10 and up will love building their very own replica model of Dominic Toretto’s famous car. After building the Dodge Charger, the fun ramps up as fans role-play classic scenes from The Fast and The Furious movie, bringing the adrenaline-fueled world of street racing to life.

I purchased this mainly cause i grew up around dodge vehicles. I was extremely disappointed. Only 4 bags and it took me less than 9 hours to build it. I figured tgere would be alot more assembly of the body. I dont recommend this to amyone who likes a challenge. If i had knowni wouldnt have paid more than $60 for it.


Man's COVID-19 coping mechanism. It helped through one week of the shutdown!

This is pretty cool. I've been buying our 7 year old boy Lego sets since he was three. This is the first time the set was for daddy!I think the wheelie is nice. It can show off the details of the undercarriage and it's a lot. It took about 4-5 hours in as many days, with many stops.This set is way bigger than I thought. I kept feeling like Tim the tool man Taylor while building.

Awesome build, I will say I was originally skeptical because 1000 pieces doesent sound like a lot, but the motor was acceptionaly fun to build. Not a huge fan of the wheelie function a bit of a gimmick but all in all amazing iconic car.I would say about 4-6 hours depending on experience. Well worth it

Great product for mid to advance level builders. Many advanced builders could be disappointed because there’s a lot more to desire from a technic perspective. But you will love it for 2 reason: because you love LEGO’s and because you love Fast and Furious franchise. As a avid builder this was an easy and quick build. As a car enthusiast this is a great car tho. But I do think is overpriced too.

This set is awesome! Car is a pretty decent size, meaning it looks really great on a shelf in an office or glass case. The build was really fun and varied. Someone else said in their review that they were disappointing in the number of bags and that the set wasn't challenging. Although what they said was true in a sense, and that the build doesn't necessarily take long, I think the less small sub-assemblies you have to build the better. I'd rather have big technic panels than have to continuously and tediously build up panels. I love the working engine components and suspension. There is a mod on YouTube you can do to lower the car so it looks more "accurate" as well. I think the set is worth it for fans of the movie or muscle cars in general.


Wish I had these as a kid!

Got this for my son's 11th birthday. He had a little help with his sister as she loves to build stuff as well, but he did 80% of it. Took him a few days as there's a ton of pieces. This is a big car! Also it's so lifelike as there is moving parts such as the pistons in the engine and the tires can move with a system installed in the back of the trunk. He likes to actually play with them with the rest of his Legos instead of just showcasing it, which he does after, lol! Money well spent even though it's expensive. Most technic are though.

Being a fan of both Dodge muscle cars and Lego technic mods I had to have this. The build is solid with just a couple working functions. The fake engine looks good and the wheelie stand works even if it is a little corny. I normally don't request more stickers but a couple more "Charger" stickers would have been nice to go on the C pillar.


It's a Lego kit. It's more Technic than Lego and it is an advanced set.

I gave it a five for easy to assemble. This is an adult Lego set. My teenage son had a lot of fun and it gave him a couple of hours worth of enjoyment putting it together. When you push it, the Pistons move and the blower chain drive spins. It also has a steering wheel on the back that allows you to steer the vehicle. He is now running it on the treadmill and discovered that even a plastic engine needs lubed. It's really a cool toy for a teenager. They sell aftermarket lighting kits that are kind of pricey. If you changed the build up a little bit, you could put your own motor on and it would drive itself.

I really enjoyed building it, the instructions are very clear and easy to follow. Took me 8 hours. Looks really good! I received as a gift and am happy with it.The only thing I got really disappointed is that Amazon deleivered with the original box... so as a gift not really nice lol plus, the box is screwed... i was angry about it. It's a collection, and the original box is very important in my opinion.

I purchased this expensive Lego set as a Christmas gift for my 14 year old son. He has been a huge fan of Lego since a child and has his collection on display. He will be very heartbroken to find that the box was badly damaged, which for him is just as important as the set itself. I did not open the set, but truly hope the set is not damaged as well.My guess is, it was dropped during packing. The lego set was placed inside another Amazon box.I have attached to photos to show the damage upon opening.