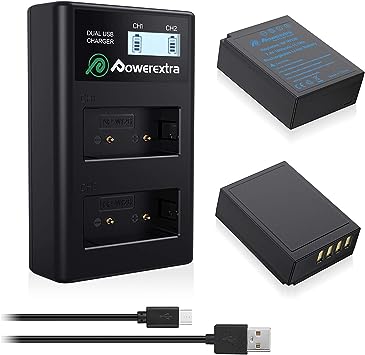 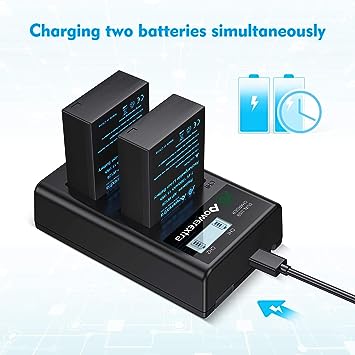 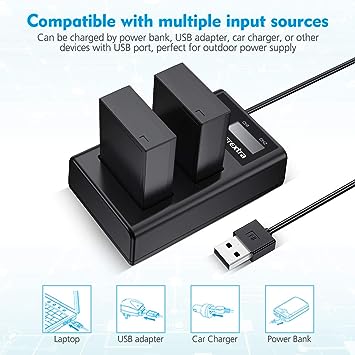 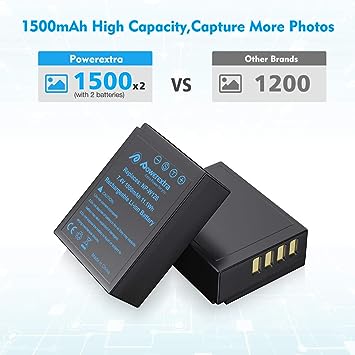 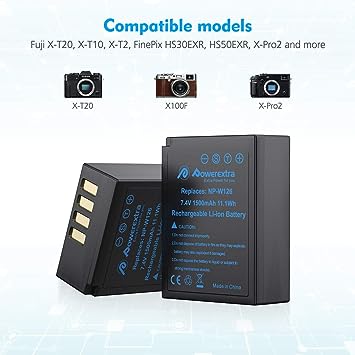 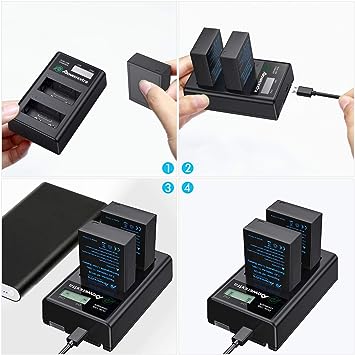 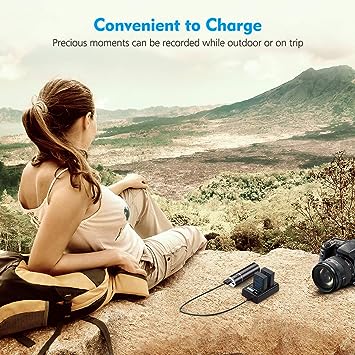 I recently bought a used X-T2 set and it came with 2 Fuji battery chargers - unfortunately, both are the old version with a long, separate power cable. This isn't necessarily a bad thing, and I plan to leave those at home in a fixed location to charge the many Fuji batteries I now have. But for travel, I was looking for a USB-powered solution since it could attach to my 5-port USB charger to reduce cable clutter.I checked and the stock Fuji chargers charge the battery at 8.4V at 600mA (5.04 Wh). So I was looking for a USB charger that could charge 2 batteries in a reasonable size (vertical battery slots as opposed to horizontal ones) that could at least charge at the same rate or better.This charger does all of that and with my USB meter, I found that it's smart enough to lower the charge current as the battery nears full charge. If the photos I uploaded are in order:1) 2 batteries A & B charging - 1 near full, 1 completed - charging at ~300mA2) 1 battery A charging - 1 near full, 1 (battery B) removed - charging at the same ~300mA (this proves the finished battery receives nearly no charge, or is on trickle charge)3) 1 battery C charging - just barely at 75% - charging at 1170mA since the battery isn't quite at the 80% cutoff yet to reduce current - the battery is being charged at nearly double the speed of the stock charger4) 1 battery D charging - low battery - charging at 1330mA showing a quick charge rate for batteries that can accept a full charge5) 2 batteries C & D charging together - charging at 1640mA, likely near the maximum power draw for charging two batteries (I didn't have 2 nearly dead batteries, so it might go higher, but even at this rate, the batteries are charging faster than the stock charger)Hopefully this info helps someone, since my initial research only showed the back to say 8.4V at 800mA (thanks to another reviewer for pointing that out and also the built-in USB cable - this sealed the deal for me). I wasn't sure if 2 batteries would have to share a max of 800mA, but now I know they can both charge at 800mA. Pair this with a large USB battery and I'll be able to travel with plenty of power to run my X-T2 in Boost mode to get the most out of my camera.


Same as stock fuji XT3 battery but half as cheap

I am totally amazed by the quality of this battery and charger and it costs nearly half the price of a standard fuji XT3 battery but lasts the same .. here are some of the key feature s1) Packaging of the charger and battery is top notch. The batteries came in their own individual boxes and everything looks premium2) The charger and battery are very well made3) The charger has a built in USB A cable to charge on the go using power bank or car charger. The cable is short but very convenient and very good thought out design4) The battery can also be charged using micro USB port on the charger using supplied cable ( no plug included but we all have tons of those lying around). It has LED display the shows charge status and it can charge one or both batteries at the same time5) The charging time for batteries is same as on Fuji charger and best part it can also charge the stock FUJI XT3 battery6) The charger is so compact so it is easy to pack when traveling7) MOST IMPORTANT - no compatibility issue or quick draining when using with FUJI XT3. It behaves same as stock Fuji battery . It doesn't give any error when using with Fuji XT3Highly recommend it , as you will need extra batteries with Fuji XT3

I shoot the Fuji X-T3. All of the 3rd party batteries I bought cause the camera to display a warning that I am not using the proper battery for the camera even though they were advertised as being a replacement for the NP-W126 and NP-W126s. These Powerextra batteries do not have that issue. So far I am satisfied with the battery life and everything else with these batteries. I purchased my first package of charger and 2 batteries and after using them have since ordered and received 2 more sets.


Nice charger. Not so sure on those batteries....

I bought this mainly for the charger, and I am glad I did– the charger is really solid. It has an integral USB cord that stows neatly, or you can use a micro USB input. USB-C like the camera would be even better, but oh well. The batteries seat well in there and it gives a clear indication of charge (or partial charge) status, with a nice backlight. It charges the two channels simultaneously. 5 stars, all the way.The batteries are ostensibly 1500mAh units, which is almost 15% more than the factory WP-126S batteries which rate at 1260mAh. However, in actual use, they seem to provide noticeably fewer exposures than the factory batteries in my experience, in spite of the significantly higher rated capacity. They do work, though. the exterior form factor is identical. Fit in the camera is good, and the camera recognizes it with no issues. I am a little wary of these WP-126S generics, particularly as this design uses a soft-walled shell that is prone to swelling if the cells fail (the factory ones are soft, too), but only time will tell. The price is certainly right, so this is an economical way to give yourself a backup. I would be wary of storing these in the camera and I would certainly not leave the charger unattended while plugged in overnight. Unlike the Fuji factory batteries, these are most certainly not UL-listed.So all in all, this is a good charger with the added bonus of workable if unimpressive backup batteries to throw in the camera bag. Give the price, it's hard to knock it. The Fuji batteries seem to work better, though, and are UL-listed, so it does seem you get something for that extravagant pricetag.

I really love the built-in (pullout) cable. I did not think I was going to use that but that's how I use it. I also live the digital screen to see the battery level rather than relying on a light indicator.Very simple and effective product. As far as I can tell, they're almost up to par to the original OEM battery I have for my XT30. No complaints at all.