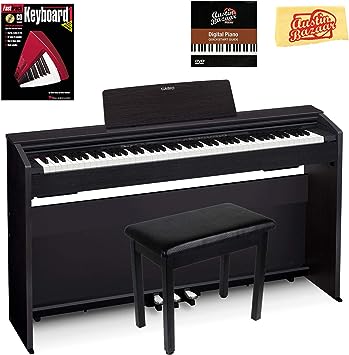 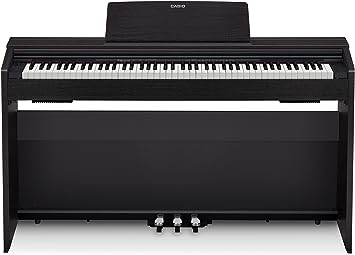 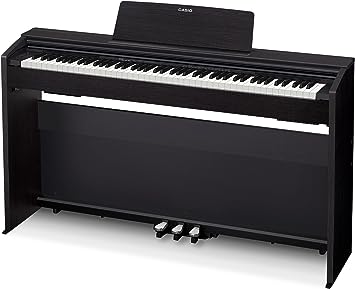 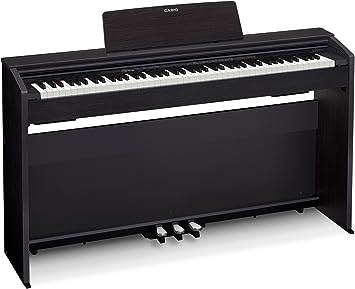 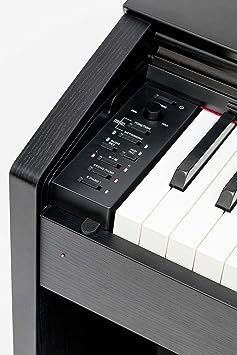 This Casio PX-870 piano bundle from Austin Bazaar includes a furniture-style bench, instructional book, instructional DVD, online lessons, and a polishing cloth. Everything you need to start playing piano in one box.

The Privia PX-870 is the flagship of the world-renowned Privia line of digital pianos, designed to give you a true grand piano experience. With authentic piano sound and feel, a stylish modern design, and the powerful new Sound Projection speaker system, the PX-870 is a brilliant instrument for inspiring brilliant performances.

The PX-870's award-winning AiR Sound Source includes a new four-layer stereo grand piano which comes alive with realistic damper resonance, simulating the entire body of the instrument, not just the strings. The piano also includes key action sounds, key off simulation, adjustable hammer response, and a lid simulator with four positions. The PX-870 also includes string resonance, which exposes the sympathetic harmonic relationships between vibrating strings. Along with adding to the subtle beauty of the sound, this adds authenticity when playing works by Debussy, Ravel, and other composers who wrote with string resonance in mind. The PX-870 features a variety of 19 instrument Tones, with the ability to layer and split them as needed. With a generous 256 notes of polyphony, you can rest assured that even the most complex performances will sound perfectly natural. The PX-870's innovative new Sound Projection system fills the room with rich, detailed sound. This powerful 40-watt, 4-speaker system is designed to envelop the listener and audience with sound emanating from various places on the instrument, just as it would on a traditional grand piano. The Volume Sync EQ ensures that you hear a balanced, clear sound across the entire frequency range, at any listening volume. 60 songs are included in the built-in Music Library, with room for ten additional songs of your choice. You can also record your performances using the PX-870's two-track MIDI recorder. Concert Play allows you to play along with ten recordings of well-known orchestral pieces, with the ability to either listen to the piano part or silence it so you can play it yourself. To facilitate practice, you can even slow down these recordings without affecting their pitch. Designed to complement any décor, the PX-870 is available in either a black or white finish. Its compact, elegant cabinet with sliding key cover adds to the beauty of any room. The easy controls are located to the left of the keys, allowing you to play without distraction. The PX-870 connects via class-compliant USB to any PC, Mac, iOS, or Android device, with no drivers or installations needed.


Worth Every Penny! Makes me happy every time I play...

This Digital Piano is AWESOME. I am a beginner/intermediate player, getting back into playing after some years. This instrument is amazing. As of writing this review there are 2 reviews that are giving it only 2 stars -- the first saying that "the keys stick and there is a clicking noise" I would say that there is some manufacturing mistake and the company should replace the unit. The second saying that the "keys are very heavy to play". The keys are weighted to feel just like a real piano. I suspect that the reviewer is used to playing on a Keyboard, not a piano. Having grown up with an actual upright piano I can tell you that the keys of this Digital Piano feel exactly as if you are playing a "real" old-school piano. The sound as well is AMAZING. If anyone thinks it does not sound like a piano, I would say they need to double check their settings. (there is a lot of technology and options and the sound can be set to mimic many other instruments) This instrument both FEELS and SOUNDS like the real-deal. As others have stated in their review(s) -- Thank Heaven for no more maintenance and tuning! PLUS you and another person can pick it up and move it if needed. I have no regrets -- this Digital Piano is worth EVERY PENNY.

I love this digital piano! I've played piano for 20 years, but had sold my baby grand and wanted to start playing again after my recent retirement. This sounds and feels like a real tull-sized piano, yet is very compact. It's attractive enough to put wherever you like in your home. I've had it about a month and am extremely pleased.


Ups and downs. But happy

I had to buy two pianos to get what I needed. Let me clarify, by accident why I hit buy now two pianos were charged to me and delivered even though I canceled one of the orders. I guess I am lucky in the fact two were sent. I opened up the first package (extremely heavy and a pain to get upstairs). Started putting it together (use the YouTube video, makes it super easy) but then as I am putting it together I find 4 damaged parts, two broken feet, and screws and parts dumped all through the box. I had to repack all that back in the box. Bring it down, Unpack the second piano and start all Over. It’s not solid wood (I get it, it’s $900 bucks), but it will do. (This I would have given a one star!! Where they get it back is the sound and seeing my wife’s face as this was her surprise. She loves it!! The keys are amazing!! It feels and plays like a real piano. The sound is great. We played on it all night long. The features are great and I foresee her loving this piano for a long time to come. If you are looking for a great sound and a “real” feel I would highly recommend this product. This is great if you are short on space. I just hope you don’t have to go through what I went through to get it.

My wife and I are college students and both play the piano. We agree that this Piano feels and looks amazing! It feels just like playing a real grand piano. The compact size works perfectly for our apartment. Very easy to transport, lightweight and easy to bring along with us when we change apartments/houses.The Speakers are surprisingly loud! The audio jack with headphones is a extremely convenient feature, because we don't want to bug our apartment neighbors all the time with the piano playing. I can even study in the same room as my wife while she is playing the piano with the headphones on. We have played a couple of times past midnight without having to worry about waking our neighbors. The piano bench came with a tear, but it was replaced very quickly and efficiently for free! EASILY 5/5 stars. Amazing product! Would recommend to anyone who is looking for a great sounding piano.

I have had this piano for a couple months now, and I absolutely love it! My preference would be for a real piano, but due to size and weight, that is not practical for where I currently live, so this is the next best thing!When you open the lid on the top of the piano, it really opens up the sound, very similar to a grand piano. The keys are weighted, and it has all the keys of a full sized piano. It also has all three petals!The piano came in a huge heavy box. I made sure I was home the day it was delivered and the delivery man put it in the garage for me. Then I tore open the box and brought everything inside one piece at a time. I was able to put it all together my self. I would recommend if possible you have someone help place the keyboard on the stand. That was the heaviest piece and a bit difficult to do on my own, but I managed.So far I am getting back into playing again, and this was an absolutely wonderful option for doing this. I highly recommend!!


I love this product

I love this product. I was torn about Casio vs Yamaha and if I should get the 860 or a lower number but I am very pleased. As a beginner piano player I wasn't sure how much I would use it but I do all the time... and now my son has taken up playing as well. It is a pretty piece of furniture and has such a light and small footprint I know that I will be able to use this for many years... and if we downsize, I know we can take it with us anywhere... or my son can. Great accessories and well made product. Especially glad to see it has a built in keyboard cover.

The package is clearly from an earlier return. At least three major faults were found. The keel board is cracked in the middle. The highest 4 white keys are permanently stuck in a depressed position. The highest key in fact makes a physical noise when pressed. The backboard has screw holes drilled on the wrong side. Overall I think the strategy of the shipper is to send returned item to the next custom hoping it will get accepted eventually. This is highly immoral and Casio should terminate contract with the vendor immediately to avoid tarnishing its great reputation.

Fantastic quality and sound. I play it more than my grand piano now. Good weight and feel. Nobody can even tell I am playing on a digital if they are listening. For the price I think it would be hard to beat. 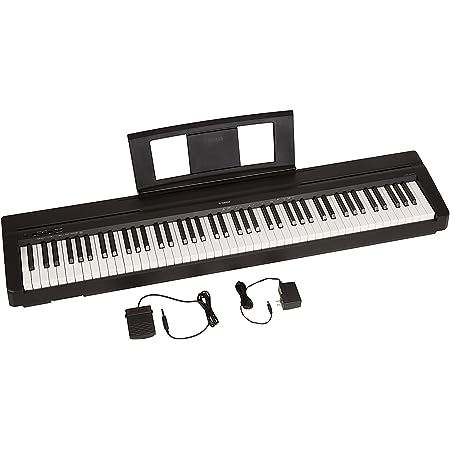 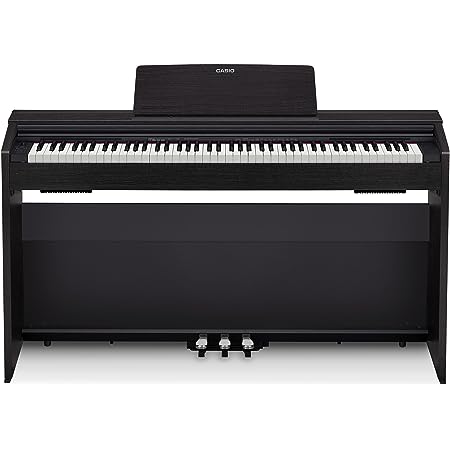 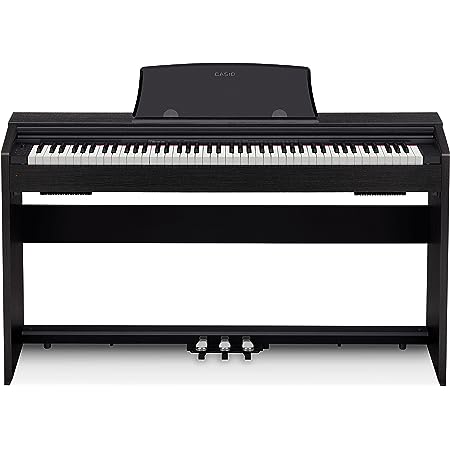 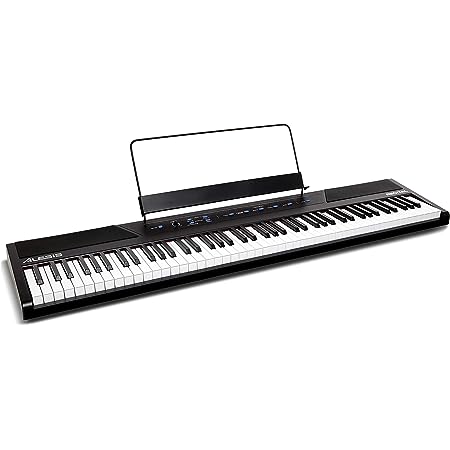