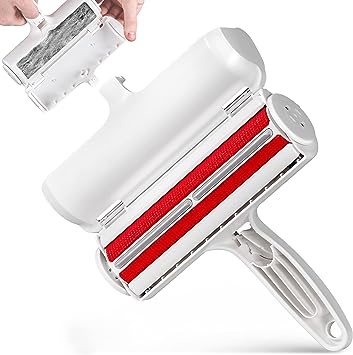 Standard Delivery: Get it to Bahrain by 01-December to 05-December with free delivery on orders above BHD 20

Voltage Disclaimer: Electrical items shipped from the US are by default considered to be 120v, unless stated otherwise in the product description. Contact binge support for voltage information of specific products. A step-up transformer is required to convert from 120v to 240v. All heating electrical items of 120v will be automatically cancelled.

The ChomChom Roller is the World’s Best Pet Hair Remover. By simply moving the pet hair roller back and forth, you immediately track and pick up cat hairs and dog hairs embedded deeply in sofas, couches, beds, carpets, blankets, comforters and more. You have probably tried all types of pet hair and lint removal products… from sticky roller tapes, to products that cannot be used over and over again. With the World’s Best Pet Hair Remover, you'll never need another gadget! No adhesive or sticky tape, 100% reusable, no power source required, clean and convenient pet hair remover. They make great gifts!

Product Disclaimer: All product information listed on the site are from 3rd party sources, including images and reviews. Binge.ae is not liable for any claims or promotions mentioned on the product description or images with textual content. For detailed product information, please contact the manufacturer or binge support by logging into your account. Unless stated otherwise during checkout, all import taxes and duty are included in the price mentioned on the product page. Binge.ae follows the rules and regulations of sale in Bahrain and will cancel items in an order that are illegal for sale in Bahrain. We take all the necessary steps to ensure only products for sale in Bahrain are displayed. Product stock and delivery estimate may change with the seller even after placing the order. We strive to process your order as soon as it is finalized.