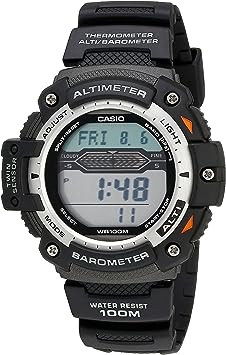 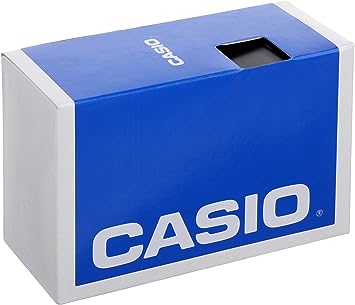 Born from a dream of "creating a watch that never breaks." It was over 30 years ago, a CASIO engineer won the battle against the laws of nature. He designed a watch that would resist centrifugal and impact forces, as well as high water pressure. Since then, the name G-SHOCK has become a byword for independence and pushing the limits. G-SHOCK watches are the most durable digital and analog-digital watches in the industry, trusted by military personnel, law enforcement, surfers and outdoor enthusiasts around the world. Along with this, G-SHOCK is highly touted in the fashion world, worn by icons in hip-hop, sports, and design. With limited edition collaborations being released often, you can always find a G-SHOCK that matches your personality and style.

This was my secondary watch for camping. We go several times a year and my smart watch doesn’t exactly last the whole week or weekend. This was actually handy to get estimates of altitude change on some of the hikes or a quick temp check.When not in use it sat with my camping gear. Went to pull it out last weekend only to find the buttons stopped responding. The last time we went camping was prior to DST time change so not only could I not use those handy features but the time was off too. Left it at home.To say this watch got little use is an understatement. Considering the other reviews with the same issues I’d say there’s a manufacturer defect here.

I'm no watch connoisseur, but I bought this one because it really inexpensive and has an altimeter. I'd read several reviews of standalone altimeters, and from what I read, this watch does as good a job as many of the more expensive, standalone models.I'm a backpacker, and I don't carry electronics, so having a map compass and the altitude allow me to figure out my position on the map with reasonable accuracy. I check the altitude on the watch against points on the map where exact altitudes are given, and I find it to be generally reliable. At least as reliable as any pressure-based altimeter is likely to be. Otherwise, it tells time.

I've had this thing for almost three years and, in that time, I've banged it on tables, doors, rocks, trees--you name it! It's a great piece of gear, and I'd definitely recommend it to anyone looking for a durable watch with some additional features. I've taken it underwater multiple times and it's performed beautifully. I wear this thing every day--through sweat, dirt, desert heat: everything--and it's never quit yet! Battery keeps on ticking, and all the buttons still work just fine!GREAT watch!


Of all the Casio watches, this is the Standout!

Let me begin by saying I have had many, many Casio watches. G's; Rangeman; Mudmaster; Protrek; the squares and rounds, thick and thin.This one is simply the standout. Why you ask?1. Cost. Of course, you can buy a cheap watch that doesn't last, but Casio is pretty good that no matter what the price range you have quality .Whey spend more for a G or fancy features when the pricepoint here is super ?2. Visibility. In my late fifties, some of the smaller Casio's simply don't cut the mustard. This has a nice, large, easy read time function, with a smaller day/date at the top. Do you ever notice even on LARGER Casio watches that the screens are SO busy and full of dials the time itself is like watching ants crawl. Nice display!3. BAND. Often overlooked, I have had many watches from Casio that are nice watches, but the band was too stiff, or awkward , or didn't sit on the wrist well. This band is flexible, soft, and gets nicer over time. It is also easily replaced.4. I won't comment on altimeter and barometer, not my thing and many others can comment on that, but they work.In short, a nice, easy to read display, a great price, and comfortable band.Way to go , Casio!


Great first impression, highly satisfied for the price. Time, testing and abuse will reveal how robust it is.

First impression is highly favorable for the price. I will update this review if it doesn't prove to be durable but the features packed into this sub $40 watch are incredible.The altimeter is a little sketchy close to sea level but the Barometer is on point. I have calibrated the altimeter and it is still off a bit, but here in Florida I'm only able to test it by going a few flights upstairs - not a great test. Next week I will be outside at 10K feet of altitude and climbing a mountain to 12.5+K feet with reference altitude markers to calibrate and compare with, and I will really get a chance to see how well it works then. The thermometer works but is pretty well useless on your wrist. It doesn't accurately display body temperature (always cooler than body temperature) and to get an accurate external temp you need to take it off and let it sit for 30 mins or so, basically useless, but cool if you are stationary for a while and have no other way of judging temperature, I guess. Don't buy it for the thermometer. Consider that a bonus/gimmick.My favorite feature is the world time screen. Once you've set your home time and timezone city, you can go to this screen when you travel and not have to adjust your watch. I already have that screen set for Denver, so when I land there next week, I just put it on this screen and my time is accurate without having to adjust the main time. Also an easy reference if you plan to call family/friends around the globe. Awesome.

I'm on my 3rd watch in about 4 years. It has been great but not perfect. My first watch lasted 3 years and, unfortunately, slipped into the lake when I caught and broke the band on something. I bet that one is still working. I didn't hesitate to replace it with the same. The display on number 2 failed in "gibberish" mode after just 3 months and Casio replaced it under warranty. Number 3 just locked up still telling time (beyond the warrantee), but buttons would not work. I was able to restart it by removing and reinserting the battery. See YouTube videos for this. I use the watch for various rough duty activities: working around the house, camping and hiking, paddling, etc. The altimeter has been very useful on mountain hikes. It's waterproof design is also a great feature.

Price: Amazing watch for the price (just under £50 when bought)Features: Has a built in Thermometer, Barometer, Altimeter, Alarm, Stopwatch, Countdown, World clock, Light, Waterproof etc.Quality Build quality is great with durable plastic strap and tough watchface glass and case. Looks great aswellFunctions:( Thermometer, Barometer & Altimeter) Much more accurate when off your wrist and placed on a flat surface.

Had this watch for about 3 years now. Thermometer and barometer stopped working reliably within the first 6 months. These functions now only work intermittently, and most times I just get an error message when I try to take a reading. I've found it solid as a watch and it has a nice intuitive interface; but the bottom line is that I bought it for the thermometer and barometer so overall it has been a disappointment. The wrist strap is cracking now, so I'm looking for a replacement but will not be buying this watch again.